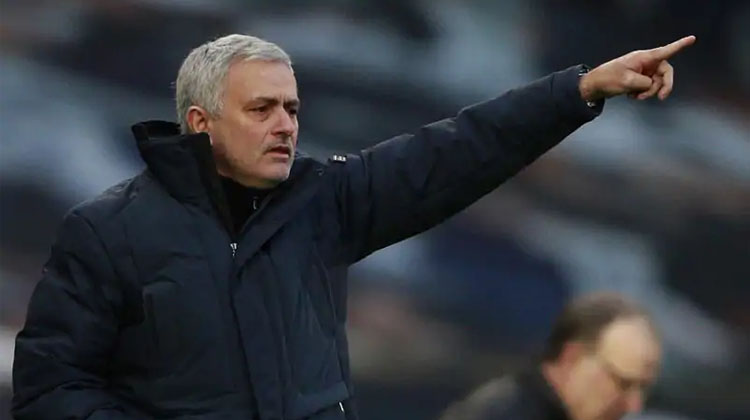 Jose Mourinho’s contract with Italian side, AS Roma, took the football world by surprise when it was announced by the Serie A club on Tuesday.

Only hours before, Roma had announced that long-serving, Portuguese coach, Paulo Fonseca, would be leaving at the end of the current campaign.

Last month, 58-year-old Mourinho was sacked as Tottenham’s coach after a 17-month checkered stint at the London-based club.

Roma will be the tenth club that ‘The Special One’ will manage and the second in Italy, having guided Inter to successive league titles in his two campaigns at the helm and the Champions League title in 2010.

With Roma currently berthed at seventh place in the Serie A standings and nine points off the top six, there is a lot of legwork for Mourinho to do at the club in the fast-approaching 2021/22 football season.

Mourinho will be reunited with former players such as Pedro, Chris Smalling and Henrikh Mkhitaryan, but he’ll also be looking to add to his armoury in the next summer transfer window.

Here are five players that AS Roma’s new boss may sign in the next transfer market.

Owing to a brilliant performance at West Ham, Lingard, who is at the East-London club on loan, will be highly sought after this summer.

According to The MEN, Mourinho had considered signing Lingard in January.

Considering that both Roma and Mourinho have been interested in the player, and considering the latter’s recent arrival at the Stadio Olimpico, then the signing of the 28-year-old English forward would appear to be in the offing.

Mourinho may consider hunting for players at his former club, Tottenham Hotspur, one of which might be the pacy Brazilian striker, Lucas Moura.

Moura was one of Mourinho’s favourites at Tottenham, as the Brazilian was fielded more than anyone else — in 80 games, with Son Heung-min the next in line at 70.

Considering that Mourinho had tried to bring Moura to Real Madrid during his time as Los Blancos coach, it would be hardly surprising if he tried again.

“Lucas is a team player, that’s what teams need and many times people in general don’t give the right value to these types of player,” Mourinho said of Moura in a post-match interview in February after Tottenham lost to West Ham.

“He’s always there for the team, playing amazing or not so amazing, but always there, always fighting for the team and today, I thought he was brilliant. He played 65 minutes two days ago and he was amazing in his effort for the team.”

It is no secret that Mourinho has always favoured a solid defensive set-up, with the methodology helping him lead Inter Milan to a Champions League title in 2010.

It stands to reason that the Portuguese would be looking to sign players with defensive talents.

Considering that the English, Eric Dier, was regularly selected in central defence by Mourinho during his time at Tottenham coach, the Portuguese might decide to lure Died to Roma.

Mourinho in the past has often hailed Dier’s mentality. When that is combined with the fact that the player speaks fluent Portuguese, it’s hard to ignore that Mourinho may have a preference for the 27-year-old.

Diego Dalot may be another player that Mourinho could bring over the Roma side.

Like Mourinho, Dalot is from Portugal. Seeing as Mourinho favours players with a Portuguese background, Dalot’s signing is a strong possibility.

The player was signed from Porto to Manchester United for £19 million. Despite suffering early injury problems, Dalot enjoyed a run of games under Mourinho prior to his sacking from United in December, 2018.

The player also has experience playing in Serie A, having played for Milan this season, and this may influence Mourinho’s decision.

When Mourinho was appointed to Manchester United in 2016, there were concerns if he’d favour Juan Mata, who doesn’t have the kind of qualities that the Portuguese coach often looks for in a midfielder.

However, the Spaniard succeeded under Mourinho at Old Trafford,

With Mata out of contract at United this summer and given his high technicality which would make him a prized asset at any club, there’s the possibility that the 33-year-old may ply his trade in Rome next season.

The 43rd Central Bank of Nigeria Senior Tennis Open Championship began on Thursday (today) and will end May 29 at Package ‘B’ of the Moshood Abiola National Stadium, Abuja. This was made known at the media unveiling of the championship held in Abuja on Thursday by the Acting Director, Corporate Communications Department, CBN, Osita Nwanisobi, who represented the Governor of […]

Chelsea set up an all-English Champions League final against Manchester City as goals from Timo Werner and Mason Mount beat Real Madrid 2-0 on Wednesday to seal a 3-1 aggregate victory at Stamford Bridge. If anything, the scoreline flattered Madrid as the 13-time European champions had no response to Chelsea’s speed on the counter-attack. The Blues should have ran out […]

After a decade of disappointment, Pep Guardiola is back in a Champions League final and just one game away from delivering on his task to make Manchester City champions of Europe for the first time. In the battle between two clubs with seemingly endless resources but no Champions League titles to their name, City kept their cool to beat Paris […]

Tottenham Hotspurs have beaten Woverhampton Wanderers 2-0 in the English Premier League. Harry Kane opened the scoring in the 45th minute from a Pierre-Emile Kordt Højbjerg assist. The lead was doubled by Højbjerg in the 62nd minute of the game. More to follow…

Frank Lampard believes he built the platform for Thomas Tuchel, his successor as Chelsea manager, to succeed at Stamford Bridge. Lampard, Chelsea’s all-time top goalscorer, was sacked in January with the Blues languishing ninth in the Premier League. Tuchel has lifted his side to third in the table and reached the Champions League and FA Cup finals in just four […]

Plans have been concluded by the Ministry of Youth and Sports Development to set up electoral committees for elections into the boards of the recently dissolved sports federations. The ministry on April 30 dissolved the boards of 30 National Sports Federations, following the expiration of their tenures. A  Director in the ministry,  Dr. Simeon Ebhojiaye, said, “In order to avoid […]

’Tosin Oluwalowo Published 11 May 2021 Chairman of Nigeria Professional Football League side FC IfeanyiUbah Chukwuma Ubah says the League Management Company is frustrating the efforts of private clubs in the league. Ubah spoke with our correspondent after match officials awarded visitors MFM FC the maximum points in their match-day 20 fixture after hosts IfeanyiUbah didn’t show up for Sunday’s […]

Segun Adewole Published 6 May 2021 Nigerian athletes and technical hands have departed the country through the Nnamdi Azikiwe International Airport in Abuja on their way to the United States. The athletes, 16 of them, will camp in Texas for three weeks during which they will engage in competitions ahead of the Olympics in Tokyo. This was disclosed by the […]