The President, Major General Muhammadu Buhari (retd.), is currently presiding over a security meeting at the State House In Abuja.

The meeting which is holding at the First Lady’s Conference Room is a continuation of last Friday’s meeting adjourned for today.

Present at the meeting is the Vice President, Yemi Osinbajo; Chief of Staff to the President, Professor Ibrahim Gambari; Secretary to the Government of the Federation, Boss Mustapha; Minister of Defence, Major-General Bashir Magashi (Rtd) and the National Security Adviser, Major General Babagana Monguno (Rtd.)

See photos from the meeting below. 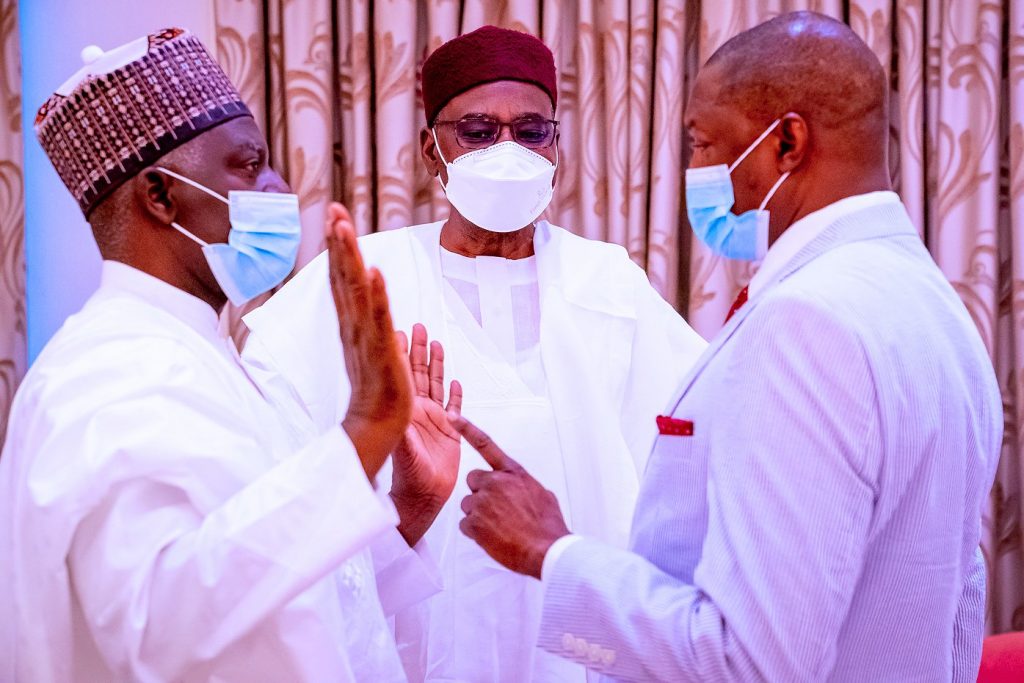 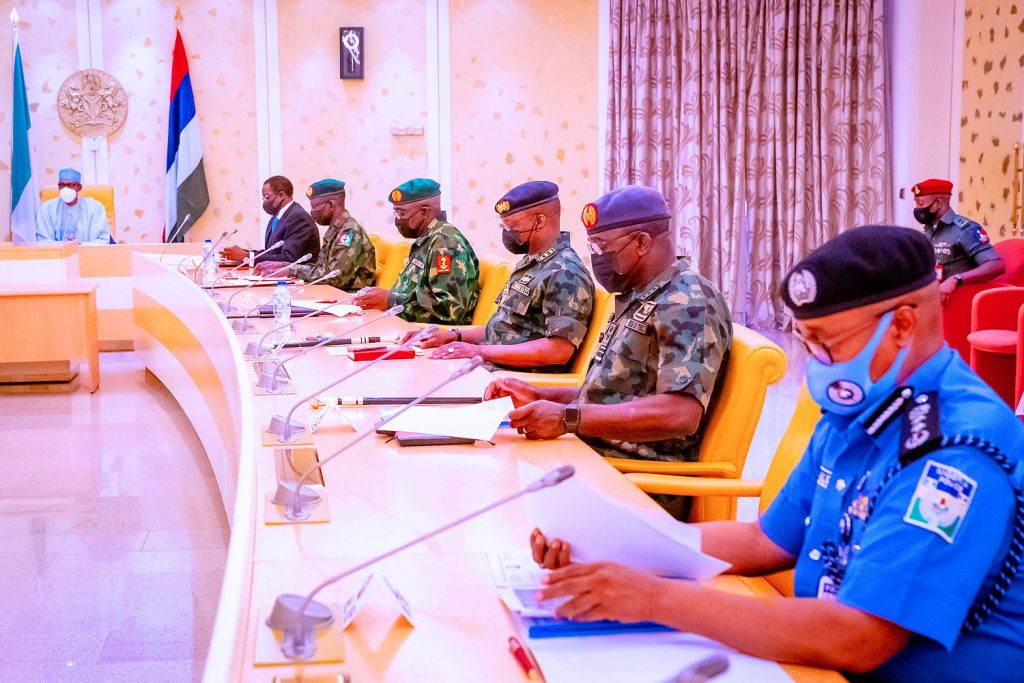 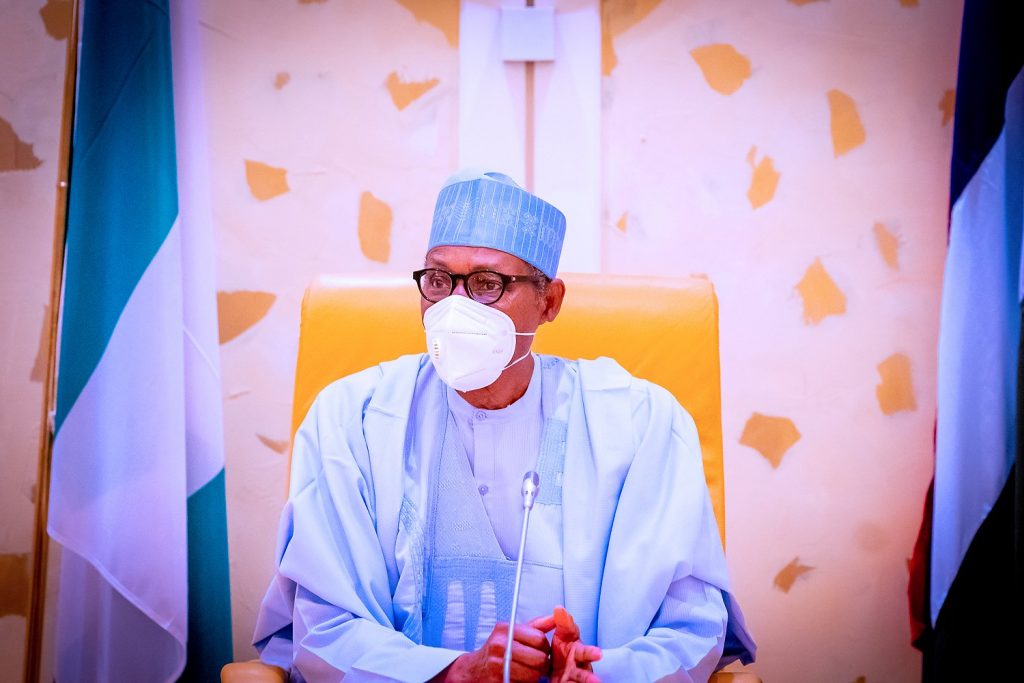 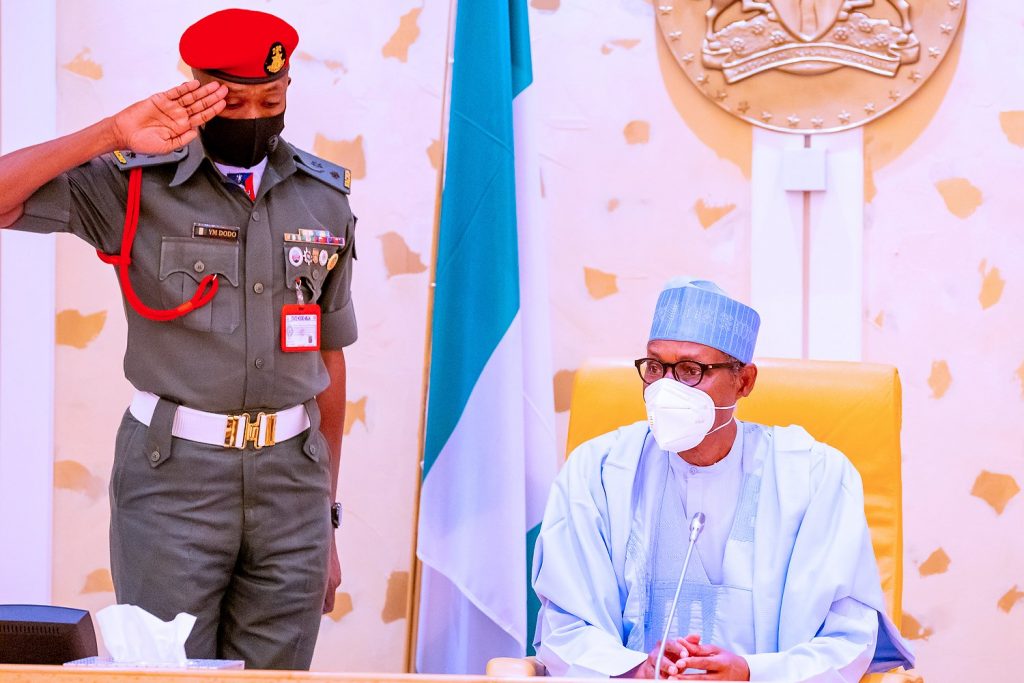 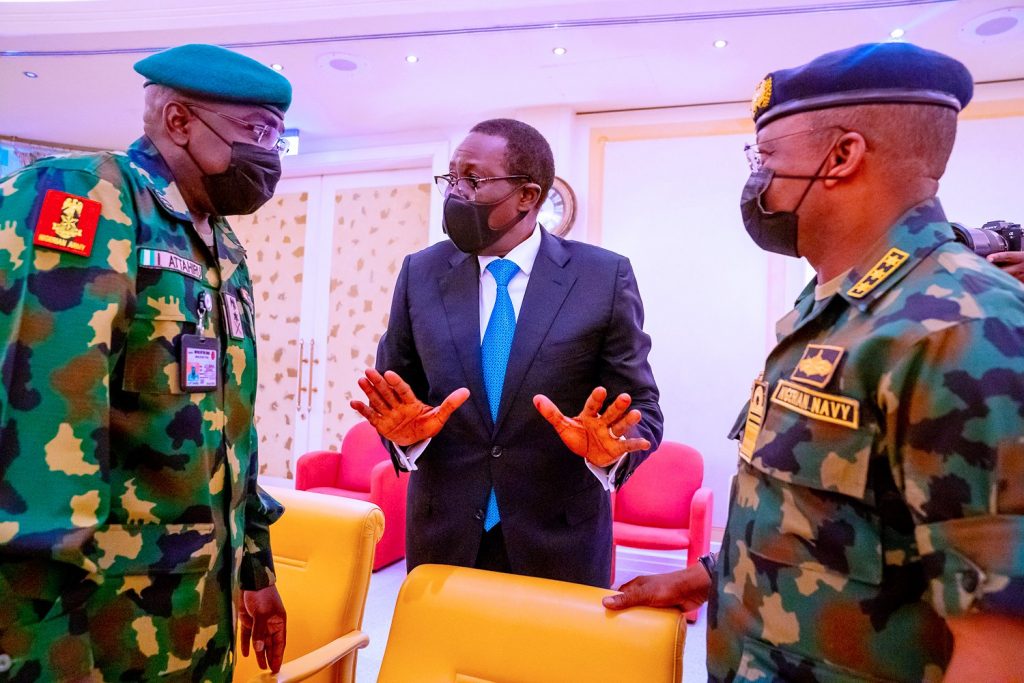 Segun Adewole Published 7 May 2021 The Economic and Financial Crimes Commission has said that it has not issued any notice on social media promising a financial reward for anyone with information that could lead to the arrest of internet fraudsters, popularly known as Yahoo Boys. The anti-graft agency said the “clarification became necessary following phone calls by citizens wanting […]

THE Secretary of the Northern Elders Forum, Dr. Hakeem Baba-Ahmed, has asked the President, Major General Muhammadu Buhari (retd.)-led regime, to step up and perform the factions for which he was elected. Baba-Ahmed said this in an interview, with The PUNCH, in Abuja, on Wednesday. READ ALSO: Bandits kill two Kaduna volunteers, abduct scores, raze church He spoke against the […]

Adelani Adepegba, Abuja Published 30 April 2021 Minister of Interior, Ogbeni Rauf Aregbesola, has admonished squadron commanders to defend the custodial facilities under their watch with maximum force. Aregbesola said the men should make whoever attacks correctional centres “live to regret it.” The minister’s directive followed the attack on the Owerri Custodial Centre where over 1,884 inmates escaped from custody […]

Segun Adewole Published 5 May 2021 The Edo State Governor, Godwin Obaseki, has reiterated the call for the restructuring of the Niger Delta Development Commission, stressing that such will drive the development of the South-South region. Obaseki made the call during a meeting with the South-South Zone Working Committee of the Peoples Democratic Party at the Government House in Benin […]

Segun Adewole Published 4 May 2021 The Governor of Edo State, Godwin Obaseki, has said the mismanagement of the economy is the reason for the level of insecurity Nigeria is currently facing. He, however, urged Nigerians not to lose hope in the country, but to work collectively to ensure a better Nigeria. He said this on Tuesday while receiving members […]

The Alaafin of Oyo, Oba Lamidi Adeyemi, and Ooni of Ife, Oba Adeyeye Enitan Ogunwusi, have expressed displeasure over the dimension insecurity has taken in Nigeria. They spoke at the 51st birthday celebration of Aare Onakakanfo of Yorubaland, Gani Adams, on Saturday. Alaafin regretted that bandits and kidnappers now have a monopoly of violence. The first-class monarch, however, charged the […]

Pastor Dare Adeboye, the late son of the General Overseer of the Redeemed Christian Church of God, Pastor Enoch Adeboye, once said in an interview that he aspired to become a footballer when he was younger. The 42-year-old, who died on Wednesday in Eket, Akwa Ibom State, where he was based with his family, was, however, the Assistant Pastor in […]

Segun Adewole Published 4 May 2021 The Lagos State House of Assembly on Tuesday suspended three local government council chairmen over alleged disregard for the guidelines governing their activities. In a statement issued on its website, the House said “it can no longer continue to watch while the council chairmen stubbornly flout the state’s local government guidelines.” The affected chairmen […]